Let There Be Theremin 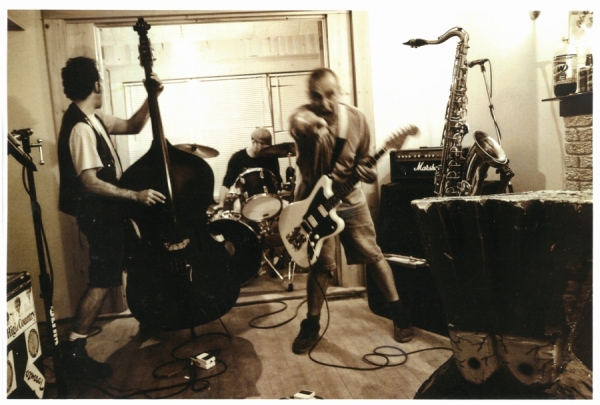 Hi! Today, I have the pleasure to chat with Dave Kapp, guitar from Let There Be Theremin 3rd wave band! Thank you Dave for taking time to answer us. Let's surf and start the interview if you please. 😉

SRR: Who are the members of Let There Be Theremin?
Dave Kapp: Dave Kapp, guitars; Kurtis Medhurst, drums and Darren Stovin, upright bass.

SRR: From which city did Let There Be Theremin originate?
Dave Kapp: Regina, Saskatchewan, Canada.

SRR: Where did the idea to form an instrumental band come from?
Dave Kapp: Me and Darren started jamming together just for fun after meeting at various rockabilly shows which were all the rage back then. I played upright bass in a rockabilly band and Darren had just purchased an upright and wanted to learn how to play. I had just started on the guitar so he was just learning as well. Neither were singers. We wanted to make a band but didn’t want too many people in it, that just makes everything more challenging so decided instrumental was a much easier choice. As everybody knows, singers are nothing but trouble.

SRR: How did you meet each other?
Dave Kapp: Me and Darren met at a rockabilly gig I was playing at the Gaslight Saloon in Regina in a band called Los Diablos. We had seen each other at many shows but never hung out. That night, I gave Darren a ride home in his Subaru Justy. When was the last time you even saw a Subaru Justy? After jamming a few weeks, it bacame apparent that a drummer would be a good addition. Darren said he had a room mate (Kurtis) who just happened to be a drummer. Kurtis was very quiet and did not say anything for the first couple of weeks.

SRR: What were the influences of the band?
Dave Kapp: Well we all like punk and rockabilly so that is our primary influence. I was into ska for a long time so there is a bit of ska in a few of the songs like Shock Thereminpy and Curse of the Camel Toe

SRR: When was your first gig?
Dave Kapp: 2007. There used to be a really fun venue in Regina called the Manhattan Room. It was run by punks and smelt like it too. That was our first gig.

SRR: What year did you do your first recording?
Dave Kapp: 2009 at Cave Studios in Zehner, Sask. It was engineered and produced by our good friend Dave Fries who really helped us out.

SRR: Did you have a label?
Dave Kapp: Not really but Dave has been labeling band recordings he has been involved in as being on Fox Hat Records. It comes from a joke where our prime minister at the time, Jean Cretien’s wife was telling him they were going on a trip to Saskatchewan and she asked him what she should wear. Jean replied in his French accent ”Wear the Fox Hat?”

SRR: Which instrument did you used?
Dave Kapp: On the recording Dave used a Fender Jagmaster through a Fender Blues Deluxe. Darren played a Hawkes by Upton upright with Innovation rockabilly strings through an Ashdown Mag 300 with 2x10's and 2x12's. The Sax is a 50 year old Pan tenor from Dave’s Kiwanis marching band days. We’re not sure about the drums they don’t have any markings on them. The theremin is a one antenna affair. All effects on the Theremin were added by Dave Fries during the mixing process.

SRR: Did you use a reverb tank?
Dave Kapp: I believe Dave Fries had rigged up some kind of giant reverb tank in his studio.

SRR: What type of strings do you use, flatwounds or roundwounds?
Dave Kapp: D’Addario roundwounds 10 or 11 gauge depending on the guitar.

SRR: Was there any reunion?
Dave Kapp: We did have a falling out around 2010. We were still friends but didn’t play together until again until about 2015 when Kurtis gave us the all clear. We rehearse and drink beer every Thursday night since then.

SRR: Where can we buy and follow Let There Be Theremin?
Dave Kapp: Are music can be purchased at Cdbaby, we are also on Facebook.

SRR: Thank you very much Dave for taking time to answer me today.
Dave Kapp: The pleasure has been ours!