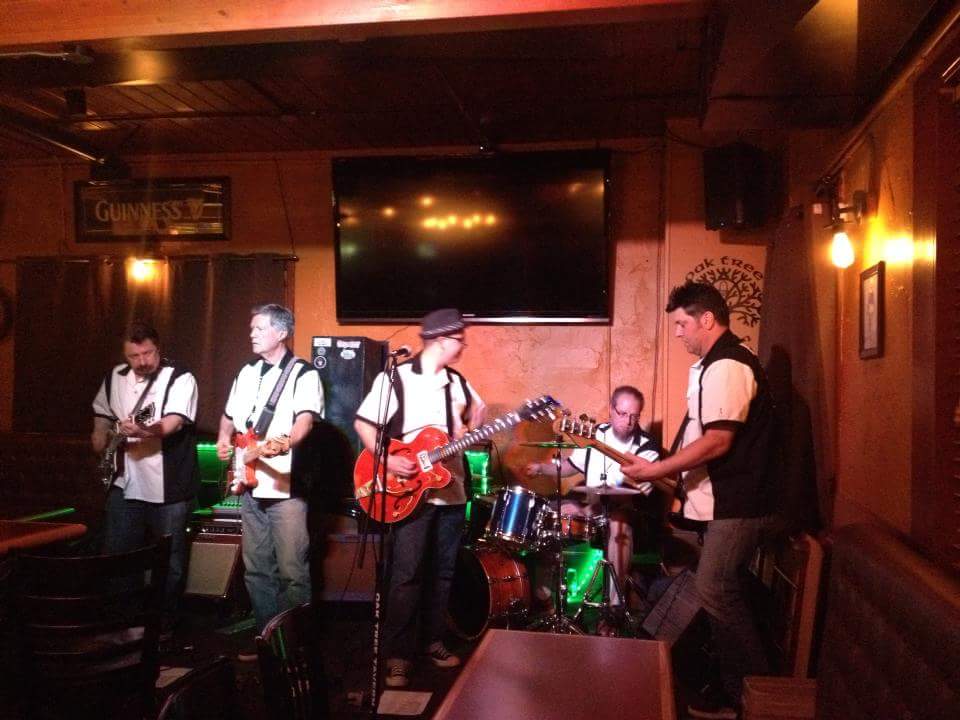 Hi! Today, I have the pleasure to chat with Todd Maduke, lead guitar from The Bigfoot Rocketship 3rd wave band! Thank you Todd for taking time to answer us. Let's surf and start the interview if you please. 😉

SRR: What year was The Bigfoot Rocketship founded?
Todd Maduke: In the spring of 2006.

SRR: Where the idea of the band name come from?
Todd Maduke: There was a university radio CJSW show called The Interplanetary Bigfoot Rocketship hosted by my pal Andrew Henry. I always thought that’d be a cool name for a band.

SRR: Where did the idea to form an instrumental band come from?
Todd Maduke: I lived and worked in Korea for a few years and I met a drummer there who turned me on to instrumental surf music. We had a band together called The Drift and we did a few instrumentals but I was on mandolin in that band! When I returned to Canada, I started The BFRS.

SRR: How did you meet each other?
Todd Maduke: Herb and Doug answered my ad in the local paper. They came together, having played together in a band before, and so we ended up with 3 guitarists.

SRR: What were the influences of the band?
Todd Maduke: The Ventures, Los Straitjackets and local legends Huevos Rancheros. Herb is a very bluesy player, so that comes in a lot.

SRR: How did you guys describe the band at the time?
Todd Maduke: We’ve always called it surf music and then you have to explain to people who think it’s Jan and Dean or something that there’s no singing.

SRR: When was your first gig?
Todd Maduke: I think it was late 2006 at a local rockabilly clothing store called The Swagger Shop. We played 3 sets that night!

SRR: What year did you do your first recording?
Todd Maduke: A guy who was at our first gig contacted us and offered to record us for free. We went to his basement studio in the spring of 2007.

SRR: Did you have a label?
Todd Maduke: No. It has been DIY from the start.

SRR: Which instrument did you used?
Todd Maduke: I had an Ibanez Artcore. It was the best I could afford and over the time I owned it I put on a Bigsby and put in TV Jones pickups. I played that on our first record. Herb had a guitar which he made that had a Telecaster pickup in the bridge spot and a vintage p-90 at the neck. Doug put his own Stratocaster together with Warmoth parts, I think. We just played what we could afford at first! Herb and I have moved on to various Gretsches since. Gerry has a few vintage Fender basses. Mike has a custom set of Ayotte drums.

SRR: Which amplifier did you use?
Todd Maduke: My amp was an SG Systems amp - 2 x 12 - big and heavy. I got it locally. A guy advertised it, without pictures, as “big old tube amp $200”. Herb has a trusty old first generation Fender Blues Deluxe and Doug played a vintage Fender Pro amp that he bought in the late 60s when he was a teenager!

SRR: Did you use a reverb tank?
Todd Maduke: Doug has a vintage Fender tank that he used on the recordings. He used it on stage some, too, but any kind of bouncy stage and that thing would just splash and splash. Herb and I just crank our amp reverbs, though I have messed around with the EHX Holy Grail pedal and sometimes just analog delay.

SRR: Was it an original or modified tank?
Todd Maduke: Original. Gerry sold it to him - Gerry’s a collector.

SRR: What are the effects used on the guitar?
Todd Maduke: I’ve always had some kind of clean boost. I like the sound of a guitar turned all the way up, but then you need some extra. So you need a boost! I’ve had so many over the years. Herb has used both WahWah and RotoVibe with The BFRS. Doug goes in clean.

SRR: What type of strings did you use, flatwounds or roundwounds?
Todd Maduke: Doug, our rhythm guitarist, has used either flat or semi-flatwound strings since day one. Herb and I trade leads and prefer roundwounds. We like the heavy-bottom/med-top sets.

SRR: How long has The Bigfoot Rocketship been active for?
Todd Maduke: 11 years or so. Maybe 12!

SRR: Were the members in any band(s) other than The Bigfoot Rocketship?
Todd Maduke: I started The Culls with Agriculture Club founder Rick Overwater at the same time as The BFRS got going. Then when that folded, I started The Ruminants. Both are alt-country bands. Gerry and Mike were in one called The Blacktop 5 for a while. Herb and his spouse Shona have Shona Rae and The Voodoo Hand, a band that’s going strong. I put out a solo album last year.

SRR: Where can we buy and follow The Bigfoot Rocketship?
Todd Maduke: Our CD of originals is available at Kerf music and our CD of covers can be bought at shows. We also have a Bandcamp, our Facebook page is the best bet to keep track of our shows.

SRR: Thank you very much Todd for taking time to answer me today.
Todd Maduke: It was our pleasure! Keep on rockin’, Franky!