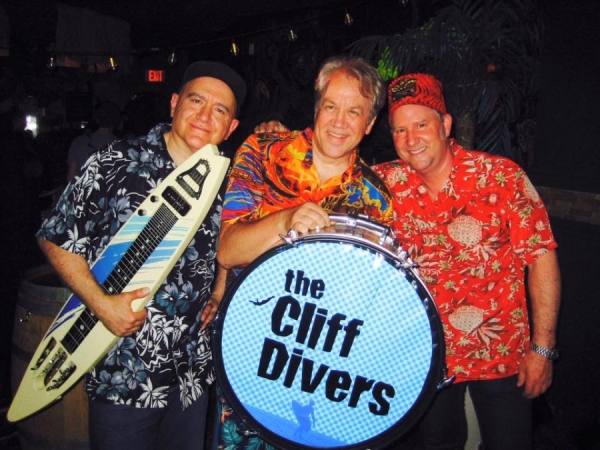 Hi! Today, I have the pleasure to chat with Dan Brody, Rick McConnell and Johnny G Mazzei, respectively drums, bass and lead guitar from The Cliff Divers 3rd wave band! Thank you guys for taking time to answer us. Let's surf and start the interview if you please. 😉

SRR: What year was The Cliff Divers founded?
Dan Brody: I think we actually started playing about eight years ago or so. We talked about it for a long time before we actually got to doing it. So circa 2009.

SRR: Who are the members of The Cliff Divers?
Dan Brody: The band is a three piece with Johnny G Mazzei, guitar and effects; Nautiloid Rick, bass and beverage bag and me Dan Brody, drums and insults.

SRR: Where did the idea to form an instrumental band come from?
Dan Brody: We all loved instrumental rock in general, not just surf, and I suggested to Rick and Johnny that we should form a surf band. I could play the drums, Johnny was the guitar maestro, and Rick was willing to play bass (he has started out as a guitarist). So finally, we got to it and we had Rick's 50 birthday party as motivation to do it.

SRR: How did you meet each other
Dan Brody: Rick and I grew up in the same small town, Simcoe and have know each other for decades. We're both fanatical record collectors too. Johnny teaches guitar, and Rick was one of his students many years ago. I met Johnny through Rick, seeing him at shows, and seeing him play with other bands.

SRR: What were the influences of the band?
Dan Brody: It would take too long to listen all our influences. All three of us love a lot of different music from rock to country to blues to rockabilly to punk to hard rock to metal.  Even though we are called a surf band, we have rock, country, blues, psychedelic, spaghetti western, jazz touches all through our stuff. We like to play what we call heavy surf.

SRR: How did you guys describe the band at the time?
Dan Brody: I have christened us the "Blue Cheer of Surf."

SRR: When was your first gig?
Dan Brody: Our first gig was the 50th birthday party for our bass player, Rick.

SRR: What year did you do your first recording?
Dan Brody: No recordings but something we would want to do in the future.

SRR: Which instrument did you use?
Dan Brody: I use a small Japanese kit from the '60s. I also have a rock style Pearl kit from the 80s.
Rick McConnell: I mostly play Fender Precision Basses. I have a few but my main one for The Cliff Divers is a recent Sonic Blue Fender ’63 Vintage Reissue. Fender really hit it out of the park with this reissue model. I also like Fender Mustangs and sometimes play my 1969 Orange Competition live. The Relic finish on that one is all natural. Terrific Bass. I also collect vintage Japanese basses. I love how the Japanese in the 1960’s combined Fender and Mosrite styling in interesting and unique ways.
Johnny G Mazzei: 68 Mosrite Mark V and other 60's 70's & 80's Mosrite's, 63 Fender Jag, Sparkle Fender Japanese Jag Reissue, Gene Parsons Telecasters signed, Mahalo Surfboard Lap Steel Guitar, Various assorted Tiesco's & Japanese guitars including 2 Intermark Cipher 4 pups, Various Danelectro reissues, Various Yamaha reissues.

SRR: Which amplifier do you use?
Rick MacConnell: I use an Eden WT550 head with either a 2x10 or 1x15 RA Custom Cabinet. Rick at RAWOODS has made me several cabinets. He will build you whatever you want. Mine are Blonde Tolex with Oxblood grills loaded with Jensen’s. Highly recommended. I also have a 200W Fender Studio Bass Head with a 1x15 RAWOOD Tone Ring Cabinet. The Fender Studio Bass is from 1978 and was originally a combo but I converted it to a separate head and cabinet. Rick at RAWOOD built both cabinets . They are finished in Brown Tolex with Oxblood Grills. I just had to pick the colours, provide the measurements and install the amp and the speaker. The speaker is a vintage 15” JBL . It sounds huge but this rig stays at home mostly since it is a bit of a back breaker.
Johnny G Mazzei: 71 Fender delux w Vintage 30, late 60's early 70's non master Fender Super Reverb, early 70's drip edge Fender Princeton that I sit on when I play lap steel.

SRR: Was it an original or modified tank?
Johnny G Mazzei: The 60's Black Fender Tank has an Accutronic replacement springTank. The 60's Blond has been modified to add a short spring as well as along spring and has a switch to change springs.

SRR: Can we know about which tube you used?
Johnny G Mazzei: My repair guy Keith selects all my tubes.

SRR: What type of strings did you use, flatwounds or roundwounds?
Johnny G Mazzei: I use Ernie Ball Beefies on every guitar 11-54, Lap Steel C6 set from Al Brisco @ Steel Guitar Canada.
Rick MacConnell: I have the Fender round wounds that came with the Bass on my ’63 VRI Precision. I don’t know the size but I would guess the E is a 100. I like them so haven’t changed them.  My other Precisions have Thomastik  Infield Jazz flat wounds (100 70 56 43)  on them that I order from none other than Carol Kaye herself. I also use her picks. My Mustangs  have La Bella flat wounds on them. They are a custom set that La Bella makes specifically for Mustangs and are strung through the body . They are (104 82 60 43). For round wounds I like R Cocos and Rotosound strings.

SRR: How long has The Cliff Divers been active for?
Dan Brody: Eight years or so.

SRR: Were the members in any band(s) during or after The Cliff Divers?
Dan Brody: Rick the bass player is in The Absolute Whores. Johnny plays in a band called Whoa Nellie. I had a punk band at one time called Bruiser Brody.

SRR: Where can we listen and follow The Cliff Divers?
Dan Brody: We have a Facebook page. The gigs are listed there. Also few videos are available on Youtube.

SRR: Thank you very much guys for taking time to answer me today.
Dan Brody: No problem, Franky! Thanks for checking us out!