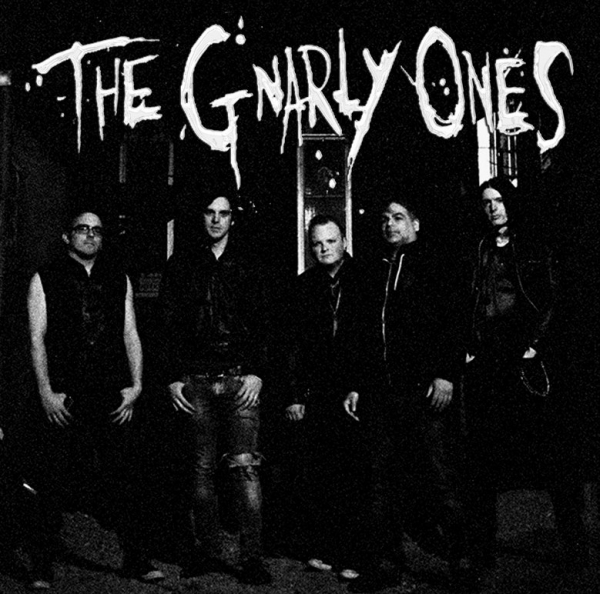 Hi! Today, I have the pleasure to chat with Nate Manor, Ari Dasgupta and Tim Jones, respectively guitar, sax and guitar from The Gnarly Ones 3rd wave band! Thank you guys for taking time to answer us. Let's surf and start the interview if you please. 😉

SRR: What year was The Gnarly Ones founded?
Nate: I think 2014? Could have been late 2013? The point was to drink beer/smoke weed in Tim's basement so... it's fuzzy.
Ari: (Laugh) It was the summer of 2013. I think the other guys had jammed once or twice before I joined them.

SRR: Who are the members of The Gnarly Ones?
Tim: Me on guitar; Nate Manor, guitar; Jim "Rhim" Davis, drums; Ari Dasgupta, sax and Mike Hanmer "aka Hambone" on bass.

SRR: From which city did The Gnarly Ones originate?
Tim: Toronto, Ontario, Canada.

SRR: Was there a name before The Gnarly Ones?
Nate: The name of the band, even a few days before our first show, was "Surf Band." Hanmer came up with the gnarly thing, thank god.

SRR: Where did the idea to form an instrumental band come from?
Nate: My first band when I was 16 was an instrumental surf band. My friends and I had seen Pulp Fiction and, you know... my mind was bent. Loved surf instrumental ever since!
Tim: Mike, Nate and I had the idea for a few years before we decided to actually start jamming.

SRR: How did you meet each other?
Nate: I was already in a band with Jim ‘n Hambone. They both knew Tim from forever ago in the goth/industrial scene. I wanted to find a sax player and my friend Meher, who had a weekly gig at my local, suggested Ari. I owe him big time now that I think about it.
Tim: I knew Jim, Mike and Nate from their other band, The Birthday Massacre. I was their guitar tech for a few shows and also knew them from the local scene when I was in another band as well.
Ari: Aww… thanks, Nate! My buddy, Meher, had heard Nate mention he was looking for a horn player, so Meher made the introduction, and the rest is history.

SRR: What are the influences of the band?
Tim: Most of us come from various other styles of music. Mostly the goth/electronic side of things. As far as surf goes, we are influenced mostly by the classic bands: Link Wray, the Ventures and so forth.
Nate: This band is definitely also influenced by all the bands we've played with… and been jealous of around town. Parks at Night, King Beez, The Surfrajettes, god, a bunch more, even Alvvays... (Laugh) and ole Dick, of course.
Ari: My influences are all over the place. Stylistically, I listen to a lot of rock and roll, ska, and jazz. Pretty much every sax I’ve heard in rock and ska have had an influence. Clarence Clemons and Saxa both come to mind first.

SRR: How did you guys describe the band at the time?
Tim: A fun band to see! Had many shoes that would get quite rowdy. Most people just liked the classic sound we played and had fun listening and dancing to it.
Ari: High energy! Surf with attitude.

SRR: When was your first gig?
Tim: January 2013, I think... (Laugh)
Ari: Only a year off, Tim! It was actually in January 2014. At The Magpie, in Toronto, with Parks at Night and The Calrizians on the bill with us. It was super cold and snowy out. We packed the place and rocked so hard that the light fixtures on the walls literally fell apart! (Not the last time a bar was left in shambles after a Gnarly encounter!)

SRR: What year did you do your first recording?
Ari: We recorded a demo of surf classics (unreleased) in the late fall of 2013. We put out an EP of originals in December 2014.

SRR: Did you have a label?
Tim: No label, just DIY.

SRR: Which instrument did you used?
Nate: Ibanez.
Tim: A custom gold sparkle Telecaster I built from parts. Has a Bigsby and Tv Jones pick-ups.
Ari: A silver, 1950 Selmer Super Action alto sax. Mike plays a Squier Jaguar bass, and Jim is a Ddrum artist.

SRR: Which amplifier did you use?
Nate: 1963 Vibrolux with a cheap, light speaker made by Fender.
Tim: Fender Deluxe Reverb

SRR: Did you use a reverb tank?
Nate: Yes I use a tank!
Tim: No, just the amo reverb.

SRR: Was it an original or modified tank?
Nate: Original, early 1963.

SRR: Can we know about which tube you used?
Nate: I use NOS tubes for the tank. I follow what's on the chart... au7s.

SRR: What are the effects used on the guitar?
Nate: Verb and amp Vibrato. I don't even use a pedal tuner.
Tim: Just the amo Reverb.

SRR: How long has The Gnarly Ones been active for?
Tim: About 3 or 4 years.
Ari: We’ve been on a hiatus since January 2016, but we’re still active at heart.

SRR: Planning any reunion?
Ari: Not yet.

SRR: Were the members in any band(s) after The Gnarly Ones?
Nate: I've played a few shows with Green Jelly since the Gnarlys? Does that count?
Tim: Three of the guys; Nate, Mike and Jim were and still are in The Birthday Massacre, and Ari sits in with many other bands and musicians.
Ari: Yeah… since the Gnarlys last played together, I’ve been guesting with a bunch of rock bands around Toronto, including our compatriots in surf, Luau or Die and The Calrizians.

SRR: Where can we buy and follow The Gnarly Ones?
Ari: You can buy our stuff on Bandcamp and follow us on Facebook. We’re on all the streaming sites like; Itunes, AppleMusic, Spotify, etc... and, of course, Surf Rock Radio!

SRR: Thank you very much guys for taking time to answer me today.
Ari, Tim and Nate: Thank you!