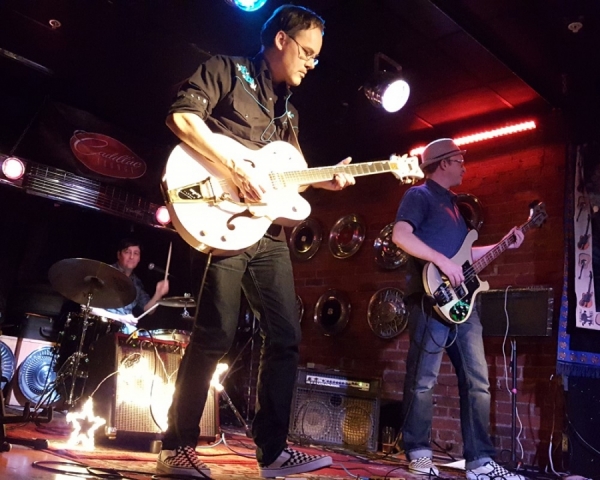 Hi! Today, I have the pleasure to chat with Buck Slater, lead guitar from The Hang Ten Gallon Hats 3rd wave band! Thank you Buck for taking time to answer us. Let's surf and start the interview if you please. 😉

SRR: What year was The Hang Ten Gallon Hats founded?
Buck Slater: We started in the spring of 2015.

SRR: Who are the members of The Hang Ten Gallon Hats?
Buck Slater: I’m on guitar; Laird Haggard, drums and The Bull is on bass.

SRR: Where did the idea to form an instrumental band come from?
Buck Slater: It had been brewing for some time - I’ve been a fan of surf/guitar instrumental music for over 25 years. It all started in my mid-teens with The Shadowy Men on a Shadowy Planet’s Kids in the Hall interludes and their album ‘Savvy Showstoppers’. Later, the Pulp Fiction soundtrack and a compilation called ‘Surf Monsters’ sparked an interest to dig deeper into the genre. Fast-forward many years and I was regularly going to see Atomic 7 and Ancient Chinese Secret play their dinner shows at the Cadillac Lounge and started to think it might be cool to do something like that.

SRR: How did you meet each other?
Buck Slater: We met in 1995 while at the University of Waterloo and played together in an indie rock band. We’ve been playing together in various forms ever since. The early seeds of the actual band started around 5 years ago when I was fooling around with Photoshop and made a poster for a fictional band with cowboy and surf images and came up with a band name for the poster: ‘The Hang Ten Gallon Hats’. A couple of years later I showed this poster to Laird and we were like ‘we should start a surf band, we already have a name’.

SRR: What are the influences of the band?
Buck Slater: My main influence is Brian Connelly and the work of his bands (Shadowy Men, Atomic 7, Ancient Chinese Secret). The Sadies, Los Straitjackets and The Fathoms are also high on the list. And, while not a surf guitarist, Matt Murphy (Super Friendz, Flashing Lights) has been an influence as well. Laird and Bull are new surf fans and their main influences come from 60s garage and other rock genres.

SRR: How did you guys describe the band at the time?
Buck Slater: We’re trying to mix surf with classic country/spaghetti western. I also hear hints of indie rock slipping in there from time to time.

SRR: When was your first gig?
Buck Slater: At the Ein-Stein pub in Toronto, March 2016.

SRR: What year did you do your first recording?
Buck Slater: We don’t have a recording yet, but we have a bunch of original songs we’re hoping to put to tape in the near future.

SRR: Which instrument do you use?
Buck Slater: I play a Gretsch White Falcon 6136T with stock pickups. I also have a late 90s American Strat with Lollar Blackface pickups, recently modified with a neck-bridge blend pot by Ben from The Calrizians. The Bull plays a Rickenbacker 4300 series bass. Laird plays a 3-piece kit, using an 18” floor tom for a kick and a Ludwig Acrolite snare.

SRR: Which amplifier do you use?
Buck Slater: I’m playing through an old solid-state Fender Deluxe 112. I’ve been using pedals to thicken my tone and make it sound more tube-y. It actually sounds surprisingly good, though would love to pick up a tube amp with a reverb tank one of these days.

SRR: Do you use a reverb tank?
Buck Slater: No.

SRR: What type of strings do you use, flatwounds or roundwounds?
Buck Slater: I use roundwounds, 11-49.