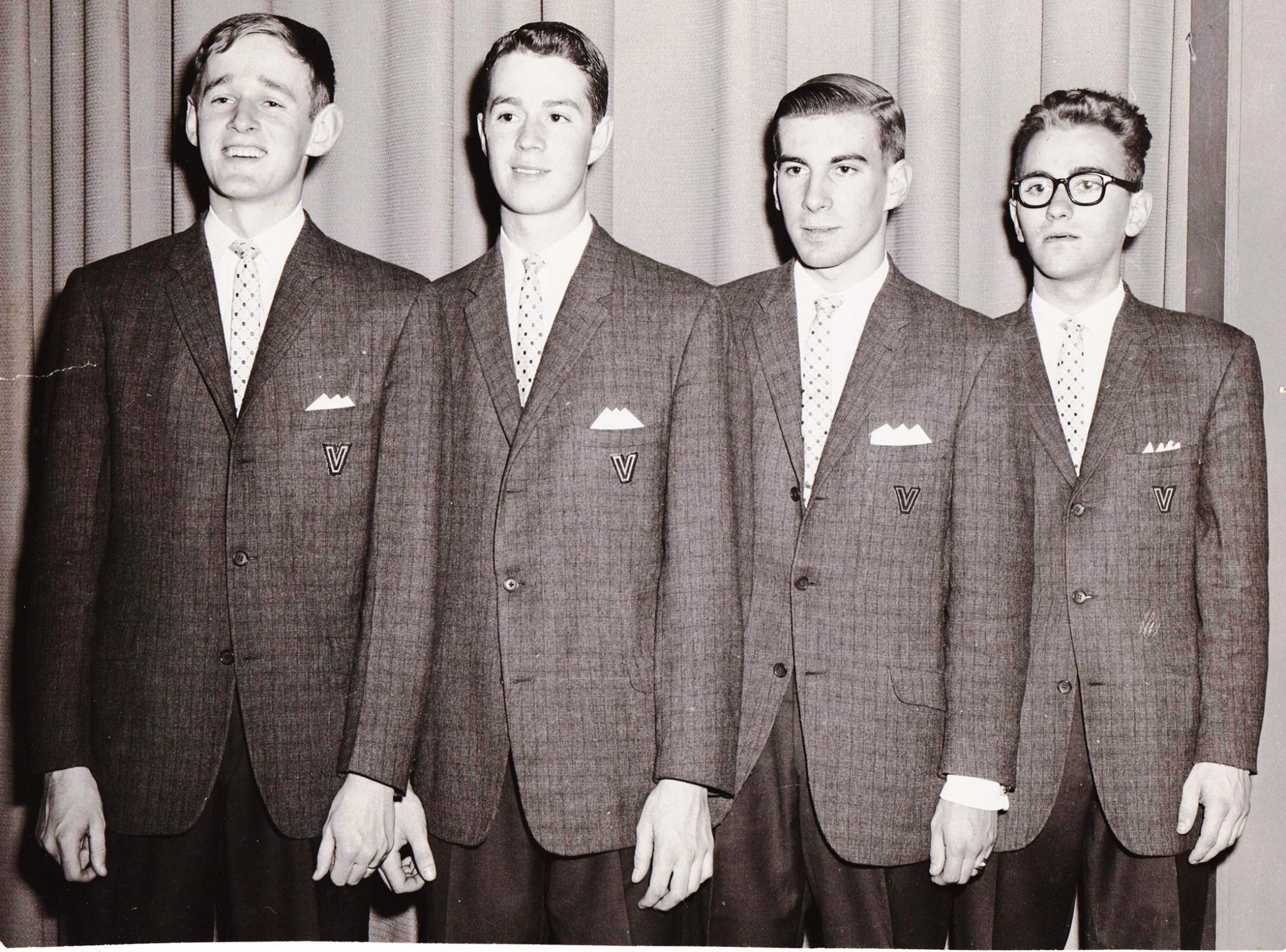 Hi! Today, I have the pleasure to chat with Roger Beaudet, lead guitar from Les Versatiles 1st wave band! Thank you Roger for taking time to answer us. Let's surf and start the interview if you please. 😉

SRR: What year was Les Versatiles founded?
Roger Beaudet: In 1962.

SRR: Who are the members of Les Versatiles?
Roger Beaudet: At the very beginning me on guitar; Claude Laliberte, guitar and Michel Wilson, drums then we added Jean Cloutier on bass and near end of 1963 Remi Clark was on baritone guitar, he became also our singer. Michel Wilson quit the band early in 2004 which was replace by Denis Manuel Lapierre, who also been replace later in spring of 2005 by Rejean Careau one of the two Megatones drummers. I had to quit myself the band in june 1965 to join les Sultans and Denis Champoux took my role till when the band splitted in September.

SRR: Where is Les Versatiles based?
Roger Beaudet: We all lived at Sillery or Ste-Foy but Remi was from Charlesbourg. Our rehearsal was most of time at Claude Laliberte place.

SRR: Was there a name before Les Versatiles?
Roger Beaudet: We named our band The Silvertones at the beginning.

SRR: Where did the idea to form an instrumental band come from?
Roger Beaudet: Back in the days band with solist singer did not exist within Quebec, we were all instrumentals bands, when the Beatles came out, after that most bands became to have vocals, we did too but not as much as the other band, still we did a 45rpm with vocal, the A side was at least, Pauvre Diable was the name of it and was my composition.

SRR: How did you meet each other?
Roger Beaudet: Me, Claude, Michel and Jean was all students at L'ancienne Academie de Quebec, we met there. Remi was Claude's friend.

SRR: What were the influences of the band?
Roger Beaudet: Sure was Chet Atkins, Les Paul, The Ventures, The Shadows to name few.

SRR: How did you guys describe the band at the time?
Roger Beaudet: We were a dance music band, we played all type of rhythms that would make peoples dance at the time.

SRR: When was your first gig?
Roger Beaudet: I remember a school hall that I cannot recall the name but also a hall at Des Syndicats Catholique on Boulevard Charest est.

SRR: What year did you do your first recording?
Roger Beaudet: We recorded our LP in 1964.

SRR: Did you have a label?
Roger Beaudet: We were under London records, there was two releases one English and one French version, the covers was slightly different.

SRR: Which instrument did you used?
Roger Beaudet: We were all using Fender instruments I use Jaguar and Claude a Jazzmaster, the drums was a Ludwig, the bass was a Precision.

SRR: Which amplifier did you use?
Roger Beaudet: Always Fender, a Showman, a Tremolux later on a Super Reverb, a Band Master and a Bassman.

SRR: Did you use a reverb tank?
Roger Beaudet: Yes a Fender Reverb Tank then after I was using the one inside the Super Reverb and as well a Klemp Echolette.

SRR: Was it an original or modified tank?
Roger Beaudet: Original.

SRR: What are the effects used on the guitar?
Roger Beaudet: Only the dealay Echolette and the Reverb Tanks, but we connected the Echolette differently to produce distortion.

SRR: What type of strings did you use, flatwounds or roundwounds?
Roger Beaudet: Roundwounds.

SRR: How long has Les Versatiles been active for?
Roger Beaudet: 1962 to September 1965.

SRR: Was there any reunion?
Roger Beaudet: Yes we did in 75' and in 80' for the purpose of Carnaval de Quebec and le Chant du Signe at Festival Retro de Joly in 2005.

SRR: Were the members in any band(s) after Les Versatiles:
Roger Beaudet: Yes Claude with les Ookpicks and all worked with Johnny Farago for a while. Jean have a recording studio nammed Coyote. I made my living with les Sultans music, I worked with the singer Stephane (Quand tu liras cette lettre), made a three pieces band renamed les VErsatiles with Denis Manuel Lapierre and Lawrence Allison, then in solo in mostly every pianos bars of the province and finally in duo with women companions until I retire end of 2013.

SRR: Where can we buy and follow Les Versatiles?
Roger Beaudet: Nowhere actually but I formed a band with members of les Megatones and les VErsatiles to review 60's era music les Mega-Versa. We have a Facebook page that you can follow, new post everyday.

SRR: Where can we listen and follow your actual band?
Roger Beaudet: Les Mega-Versa on Facebook. The band will be the highlight at Centre D'art la Chapelle in Quebec city Sunday Octobre 29 at 2pm which will be our last gig, then will cease the band activities.

SRR: Thank you very much Roger for taking time to answer me today.
Roger Beaudet: It was a pleasure.